Let us now consider what happens when a neurone generates an action potential. As well as the Na+/ K + pump, the membrane also has ion channels through which ions can pass under certain conditions; one of these is called the sodium channel. This allows sodium to move into the cell driven by the concentration difference on both sides of the membrane. However, it is usually closed in a resting nerve cell. When a nerve cell becomes activated, this sodium channel opens up and sodium flows into the cell due to diffusion. As the positively charged sodium rushes into the cell it brings with it its positive charge and the inside of the cell changes from being negative, when compared with the outside, to actually being positive. The membrane potential rises to +30 mV. This change in polarity from negative to positive is called depolarisation (Fig. 6). As the membrane potential becomes more positive, eventually the sodium channel closes.

You have already completed the quiz before. Hence you can not start it again.

You have to finish following quiz, to start this quiz:

Figure 7 shows an animation illustrating how the action potential spreads along the axon. When we measure membrane potential at a particular point on the axon, we first see the resting potential is at -70 mV. When the nerve impulse arrives, ion channels for sodium open, sodium flows into the cell and the membrane potential is locally reversed to +30 mV. This is depolarisation. Immediately afterwards repolarisation occurs and the membrane potential returns to -70 mV. This is due to the opening of the potassium channels. The cell has regained its resting potential. A nerve impulse is conveyed along the axon when such an action potential spreads through the axon.

The nerve impulse thus consists of a local depolarisation that spreads along the axon, followed by a corresponding local repolarisation which restores resting potential and prepares the neurone for a new nerve impulse.

As mentioned previously, an axon with a myelin sheath around it transmits a nerve impulse faster than axon without a myelin sheath. The reason for this increase in speed can be understood when we consider the arrangement of the ion channels in these axons. There are no ion channels to exchange sodium and potassium with the outside of the cell where the axon is covered in myelin. Instead, these are concentrated into the small gaps in the myelin called the Nodes of Ranvier (see Fig.2). Therefore the positive membrane potential generated by an action potential at one node draws negative ions from along the axon between itself and the next node and the sodium channels are destabilised at the next node, leading to the triggering of an action potential here, instead of in the area directly adjacent to the first node.  In this way the action potential “jumps” along the axon (see Fig. 8).  This is known as saltatory conduction. In addition to myelin, the diameter of the axon matters with respect to signal speed. The larger the diameter, the faster the nerve impulse travels. The fastest nerve cells have speeds of up to 130 m / s. 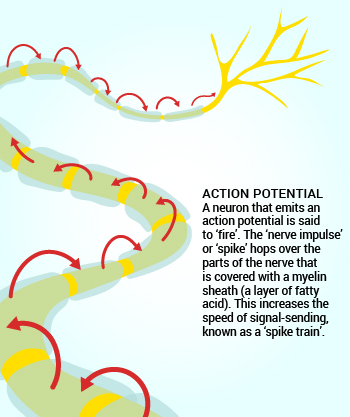 Think about a time when you have stubbed your toe. First you feel a sharp stabbing pain and probably shout “ouch”, then afterwards you feel a long dull throbbing feeling. The reason for this is that the type of pain receptors that send the sharp stabbing pain that alerts you that you have hit something convey signals via large, myelinated nerves whereas the pain signals associated with the dull ache travel in smaller, non-myelinated nerves. Therefore, the sharp pain reaches the brain first, causing you to shout “ouch” and then this is followed by the dull aching pain.