Nerve cells transmit their nerve impulses, to either:

Let’s consider what happens when you lift your arm. Prior to the lift, nerve cells in different areas in the brain communicate with each other via nerve impulses. Within the brain, complex patterns of impulses are generated and these move between brain cells in different areas of the brain as the brain performs it computational functions. We say that the neurones communicate with each other. Finally, a nerve impulse leaves the brain and travels via a series of other nerve cells to the skeletal muscle cells stimulating them to contract.

All of our higher cognitive functions such as thoughts and learning also involve such neuronal communications.

Nerve cells, communicate with one another through specialised junctions called synapses (further described in section 3.3). A neurone receives impulses from other neurones mainly through synapses on its dendritic tree and cell body (Fig. 4). If conditions are right, then this neurone will generate an electrical signal of its own. This impulse will be transmitted down the axon where it will go on to stimulate other neurons along the pathway. (Fig. 4).

The production of nerve impulses is carefully regulated. There are in fact two kinds of impulses a nerve cell can receive. These are called:

Stimulatory impulses arriving on the dendrites or cell body increase the likelihood that the neurone itself will generate a nerve impulse in its axon.

Inhibitory signals arriving on the dendrites or cell body decrease the likelihood that the nerve cell will generate a nerve impulse in its axon.

It is the summation of the stimulatory and inhibitory impulses that determines whether or not a neurone will generate its own impulse and send this down its axon. There is a threshold level of stimulation that must be met before a nerve cell will generate its own impulse. Each stimulatory input makes it more likely that the cell will fire off an impulse, whereas each inhibitory impulse makes it less likely.

In reality this is an extremely complex process. For example, nerve cells in the spinal cord are in contact with no less than 10,000 other nerve cells on their dendrites and cell bodies. Some of these are stimulatory and other inhibitory. Not all are necessarily acting at all times. This means that at one time the inhibitory signals may dominate, whilst at other times the stimulatory signals may dominate.

Some drugs can be used to influence this process. When you take a sleeping pill, the ingredients of the pill affect the inhibitory signals so that they dominate in certain areas of the brain. A sleepy state is induced because the activity of nerve impulses that keep the brain active are inhibited.

In order to fully understand these processes we must dig a little deeper. 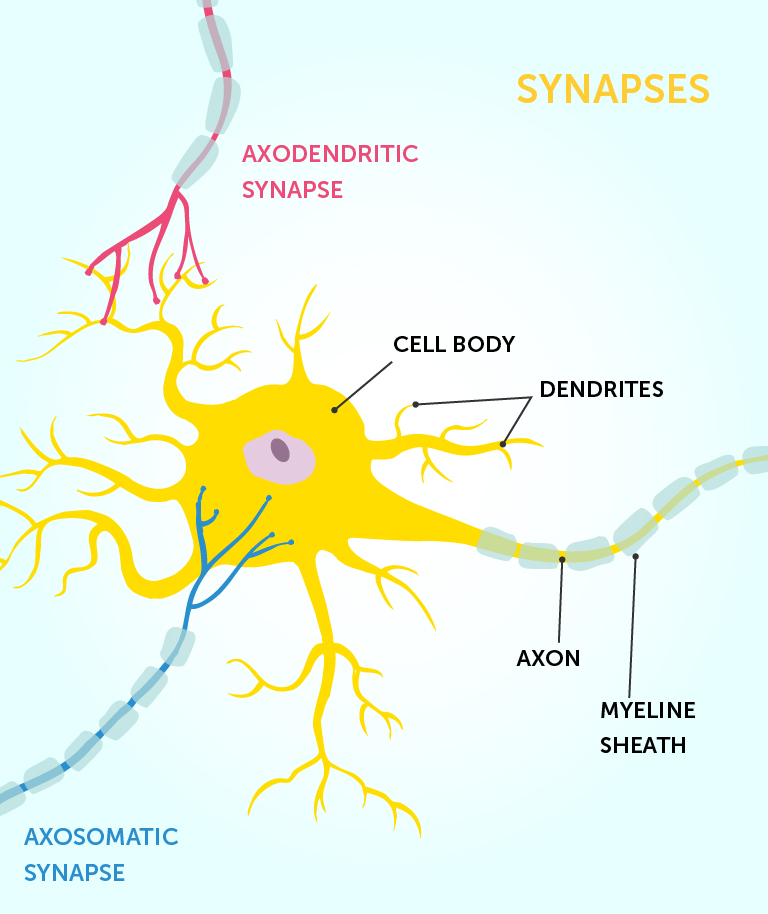